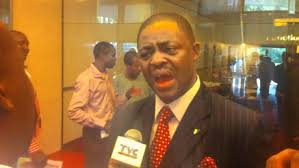 The pan-Yoruba socio-political
organisation, Afenifere, has demanded the immediate release of former
Minister of Aviation, Mr. Femi Fani-Kayode, who has been in the custody
of the Economic and Financial Crimes Commission (EFCC) in the last five
weeks.
Making the demand yesterday on behalf of
the group, the National Publicity Secretary, Mr. Yinka Odumakin, who
attributed Fani-Kayode’s current predicament to his critical stance
against the activities of the violent herdsmen, said he should be
charged to court if there are substantial evidence against him instead
of keeping in custody endlessly.
He said Afenifere got wind of the
information that the EFCC is planning to get another detention order to
continue his incarceration.
According to Odumakin, the Afenifere is
at a loss as to why the EFCC had to announce that Fani-Kayode committed a
crime by collecting money for campaign and hold him for five weeks
without charging him to court.
“It is in the same country that EFCC accused one Jafaru Isa of
collecting money for election and allowed him to go after a night in
EFCC cell.
Why is Fani-Kayode situation different if indeed it is all about
corruption and not a ploy to keep him out of circulation for his
critical views, especially on the criminalities of the Fulani herdsmen.
“We demand that he be charged to court immediately or set free if there is no charge against him,” he said.